As one half of the producer duo The Neptunes, Pharrell Williams confirms to News.au.com, alongside other new projects, that "We've also got some stuff going on with Madonna."

Madonna first collaborated with Pharrell 4 years ago, initially on the charity track Hey You and then The Neptunes ended up co-writing and co-producing 7 songs on Hard Candy. The Neptunes has been a prominent beatmaker duo for more than a decade, producing many high-profile pop artists, the most recent being Shakira.

Please note that each and every Madonna studio album in the past 20 years started as a collaboration with a previous producer but most of them eventually went into a different direction.

Discuss this news with other fans on our Facebook page.

It was a very Madge Christmas for the 25,000 orphans in Malawi. Madonna shipped boxes and bales containing toys, chocolate and sweets to six orphanages in the birth country of her adopted daughter, Mercy. Along with the goodies, the 52-year-old star included a handwritten note that read "To my Malawi children on Christmas and Boxing Day. I wish I was with you. See you soon, M."

Officials at Madonna's charity, Raising Malawi, distributed the items and other miniature Christmas cards signed by Madonna and children Lourdes, 14, and Rocco, 10. The notes read: "Mercy, David, Rocco, Lourdes and I send you a blessed Christmas to all of you!"

Also in the bales were new clothing and items that Madonna, Lourdes, Rocco and Mercy have outgrown and can no longer use, officials tell UsMagazine.com.

Madonna also threw an open-air party at Consol Homes, an orphanage near Lilongwe, the town where she teaches a Kabbalah spirituality class to children.

Over 1,000 people from the surrounding villages were invited to celebrate with the 2,500 orphans and underprivileged children. "Madonna says she always enjoys the traditional dances the villagers perform for her when she visits," Yacinta Chapomba, director of Consol Homes, tells Us. "She asked us to invite as many villagers as possible for the Christmas party."

Madonna has been crowned the most talked-about celebrity of the noughties. The 52-year-old has had her name mentioned in UK print media more than any other star since 2000. Brian Merron, of researcher Kantar Media, said: “This shows why she’s hailed as a legend.” X Factor judge Simon Cowell was the most talked about in 2010.

Madonna.com has just posted this statement from Madonna herself:

"It's official! I need to move. I need to sweat. I need to make new music! Music I can dance to. I'm on the look out for the maddest, sickest, most bad ass people to collaborate with. I'm just saying......" - Madonna

Please note that a collaborator does not necessarily mean another singer, but songwriters and producers as well that Madonna always works with when creating music. It is unknown when Madonna will actually enter the recording studio and when the fruit of that will see the light of the day, but it's more reasonable to expect something in the third quarter of the next year at the earliest.

Madonna's debut clothing line, which was formerly only sold in the U.S., will now be available internationally. The pop music icon's range of juniors apparel, footwear and accessories will launch for the spring 2011 season.

HBC, one of Canada's leading fashion retailers, announced that it has entered into a multi-year license agreement to manufacture and distribute "Material Girl" clothing and accessories in Canada through its 91 stores. This is the first license outside of the U.S. for "Material Girl" and marks the beginning of an international expansion strategy for the brand.

Madonna's "fast fashion" junior collection was launched exclusively at the U.S. department store Macy's this past August. The collection was designed in collaboration with Madonna and her 13-year-old daughter Lourdes, along with Iconix Brand Group's in-house fashion department. The fashion line is a 50-50 joint venture project between Iconix Brand Group and Madonna and her manager Guy Oseary.

Gossip Girl star Taylor Momsen serves as the brand spokesperson. The 80s-inspired line, which comprises grunge meets glam rock pieces like bodysuits, rompers, skinny sequin leggings and faux leather cropped biker jackets, is very affordable. Jewellery ranges from US$14 to US$36, while clothing ranges from US$15 to US$58.

The global expansion of Madonna's clothing venture is significant given that most American celebrity fashion lines are only available domestically. For instance, rapper Sean Combs' "Sean John" is only carried at U.S. mainstream department stores like Macy's while reality star Lauren Conrad's "LC Lauren Conrad" is only available at the low-cost U.S. retailer Kohl's.

Madonna in partnership with her manager Guy Oseary and Mark Mastrov, Chairman of New Evolution Ventures (NeV), announced the opening of the second Hard Candy Fitness Center in Moscow which is projected to open in mid-March 2011.

The new facility will be a beautifully designed and unique 35,000 square foot space located near Red Square. Moscow’s Hard Candy Fitness will also include a partnership with Irina Razumova, founder of the well know Russian chain Planet Fitness. The news of the Moscow location comes on the heels of a successful grand opening for the brand’s premiere location last week in Mexico City, which featured a special dance class taught by Madonna.

"It's especially exciting to have the second Hard Candy Fitness open in Moscow as I really enjoyed the city and the people when I visited during my Sticky & Sweet Tour. Working in collaboration with the experts at NeV and Irina, I know that we will create the ideal workout environment in Moscow that represents my health and fitness philosophy as well as include innovative and inspiring programs," commented Madonna.

Mastrov, his partner Jim Rowley of NeV, along with Madonna and Oseary are in the planning stages of opening 10 additional Hard Candy locations in Russia, Brazil, Argentina, Europe and Asia. They are currently exploring opportunities around the globe for facilities that will offer a unique member experience in all aspects including curriculum, environment and fashion. 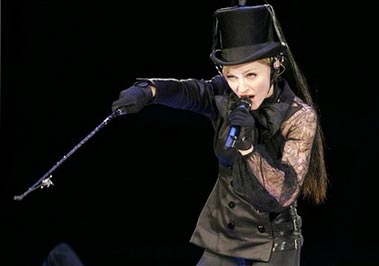 Throughout her career, Madonna has been devoted to fitness and well being. Having worked out in hundreds of gyms around the world, she developed a strong vision on what the ideal exercise, dance and workout environment should look like. The vision took shape during an initial meeting between Mark Mastrov, the innovator behind some of the World’s best known Fitness Brands and Guy Oseary early in 2008. Mastrov has built a fitness empire of over 1100 clubs in over 20 countries. "Our goal is to create an environment around the world inspired by Madonna's vision and high standards. Hard Candy Fitness Centers will be a reflection of Madonna's point of view and will reveal her input on every detail including music, design and class curriculum. Madonna's touch will be everywhere," stated Mastrov.

The Moscow Hard Candy Fitness Center along with others in the planning stages will include proprietary Hard Candy Fitness programming inspired by Madonna and her dance team, a Bike Studio as well as a Mind Body Studio, featuring The Great Wall, where members can practice BarWorks, Sculpting, Capoeira and the newest trends in Yoga. It will also house a healthy alternative Juice Bar/Café and lavish locker rooms.

Members will benefit from state of the art cardiovascular equipment with personal viewing screens, more than 60 pieces of strength equipment/free weights and the best group fitness, functional training accessories using brands including Precor, Marpo Kinetics, Hoist, Free Motion, StarTrac and TRX suspension training. "We are so excited and honored to be able to open the Hard Candy Fitness brand here in Moscow. Madonna has been an inspiration for us all and we can’t wait to bring this beautiful facility to life,” said Irina Razumova, partner with Hard Candy Fitness and NeV.

~ A small glitch of Lady M herself: the Sticky & Sweet Tour didn't visit Moscow, but St.Petersburg. The Confessions Tour was the only tour performing in the Russian capital.