← Back to Madame X Tour overview

The show's over, say good-bye: our report from the last show

While yesterday's fans had the bad luck of enduring a cancellation, tonight's fans were lucky to get the full show, starting a bit before 11pm. Throughout the show, she was obviously in pain, moving very carefully.

At the polaroid moment, she said she didn't think her show was the best and she apologized to the crowd for the many cancellations. She was so vulnerable that the crowd gave her a heartwarming standing ovation. The polaroid was sold for €4.100 ("that's specific, did you break open your piggy bank?") to Salvatore from Italy (who was actually a messenger for the actual buyer, his friend Stefano, who was sitting high on the balcony). The beer bitch was Fahri, a French standup comedian with parents from Cape Verde.

After Human Nature, as she stood on stage with her 3 youngest daughters, she spoke about International Women's Day: "When you don't realise we're all in the same boat, we will all sink". At the end of Medellin, her son David made a surprise appearance on stage.

A lot of parts of the show were being filmed. Apart from photographer Ricardo Gomes, there was another crew member often seen filming with a go-pro and a mobile phone. Ricardo also filmed the exit of I Rise.

News now comes in that the French government has issued a ban on events of more than 1.000 participants, which would affect the last 2 shows. That would mean tonight's show was the last one.

The show is over, say good-bye 🖤 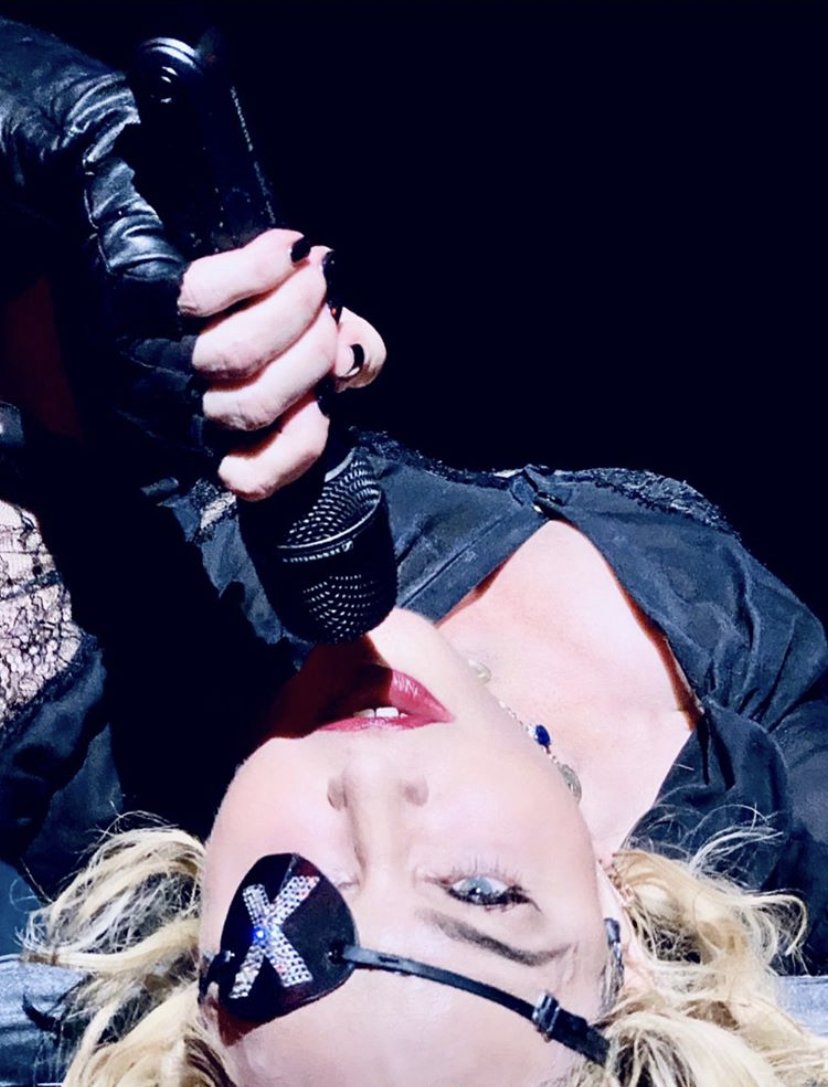 Sipping champagne with Christine (and the Queens)

Surprise: last night Madonna performed the long version of the show, for a 2nd night in a row. The polaroid was sold for €4.200 to a fan named Alan. The beer champagne bitch was Chris from Christine and the Queens. Next show: Saturday. 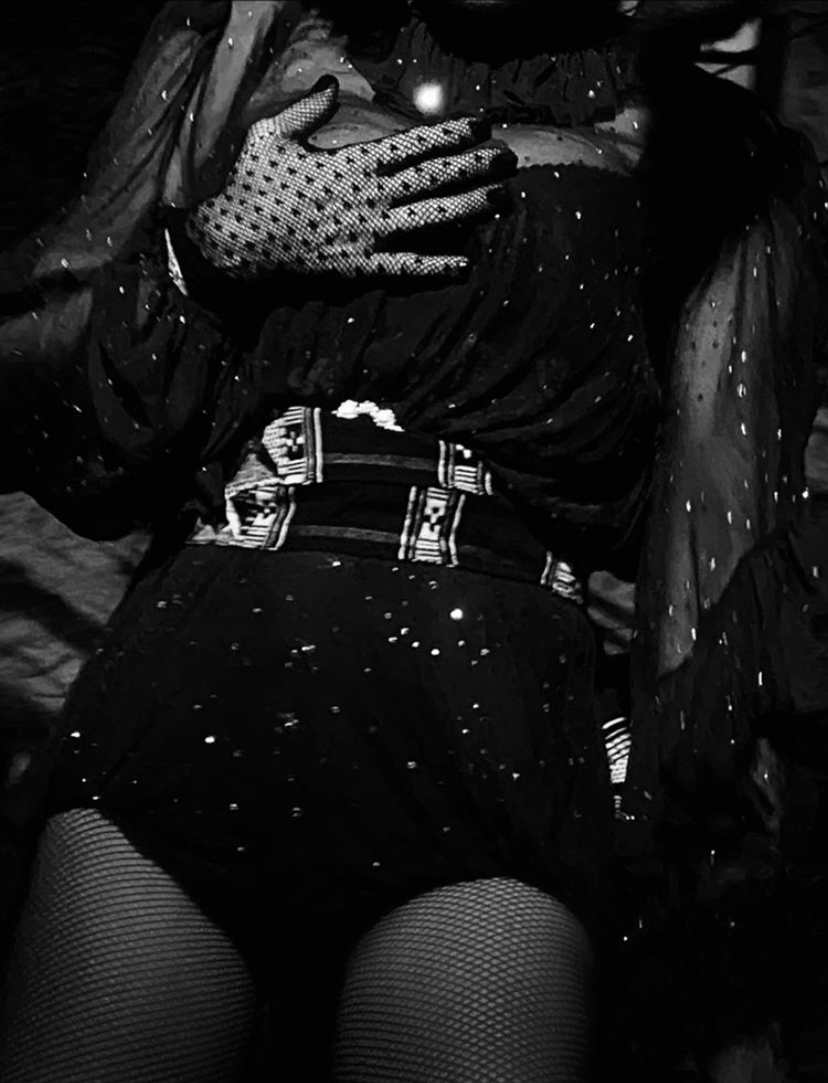 God is a woman with a broken leg

Last night, Madonna took the stage a bit before 10pm, performing the long version of the show and finishing around 1am. The beer bitch was back, so no La Vie en Rose. The polaroid was sold for €3.000 to Petra from Croatia. Her daughters didn’t join on stage for Human Nature. Instead , the dancers said “God is a woman”, with M adding “God is a woman with a broken leg!” 😉 Next show is tonight, who will be going? . . #madonna #madeyes #madamex #legrandrex #madonnainparis #godisawoman #brokenleg #humannature #madonnashow

Tonight's show cancelled: "I'm a broken doll held together with tape and glue"

Here I Am——Flesh and Blood 🩸 If only knees didn’t twist and cartilage didn’t tear and nothing hurt and tears never fell out of our eyes.........But alas they do and Thank God for this important reminder that we are human. I Fell 2 nights ago on stage when a chair was literally pulled out from underneath me by mistake and I landed on the floor on my tail bone. I made it thru the show last night but just barely because I hate disappointing. However today even I can see that this broken doll held together with tape and glue, needs to stay in bed and rest for a few days so she can finish the tour with a smile on her face and in one piece. ❌ Thank You for your understanding Paris! 🇫🇷 🙏🏼 #madamextheatre

Front line, I won't stand in the back

M cries on stage after falling off chair

Last night, Madonna had a difficult time. During the opening number Vogue, she missed the chair when sitting down, fell on her butt and visibly hurt herself. After I Don’t Search I Find, she needed time to recompose herself and was sobbing that she was in so much pain. Through the tears she said “ I made my bed and now I’ll lie in it. I will finish this fucking tour, whatever the cost!”. Later in the show, she added “ Earlier I might have sobbed like a cry baby but I could still kick each and every one of your asses!” The polaroid was sold for €3.000, as she was talking about how children in Malawi have so little but are happier than us, who have so much. The guy even got 3 polaroids. There was no beer bitch. Instead, M sat down on the stairs and sang La Vie en Rose. Today there’s a day of rest. Let’s hope M recovers for the shows on Saturday and Sunday. . . . #madonna #madeyes #madamex #kneeinjury #vogue #idontsearchifind #lavieenrose #beerbitch #showreview #madonnaparis #legrandrex #madamextour #pain #polaroid

When Madonna sat in front of us in the audience

The second Madame X show in Paris just finished (1.15), it started a bit after 11pm with Vogue. The show had some technical difficulties, completely halting before Batuka. Madonna herself came from behind the curtain, apologising for the delay and explaining that the stage was actually too big for the French theatre, which was also the cause for the late start yesterday. She sang Elvis Presley’s Falling In Love until the problems were solved. For Killers she asked people to come closer to the stage, and when security chased them away, M asked them back again. So most of the show there were fans in front. The polaroid was bought by German fan Jörg for €2.000, and he told her “Thank you for inspiring us with your art!” which she appreciated. The beer bitch (who was sitting in front of me!!) was Jason from London. Madonna was a bit nervous because so many fans were surrounding her. But most of the show she was happy and smiling. Her vocals were gorgeous! 😊 . . #madonna #madeyes #madamex #madonnaparis #technicaldifficulties #beerbitch #polaroid #legrandrex #specialshow #madamextour

Immense Gratitude to the Rex Theatre

Immense Gratitude to the Rex Theatre and everyone who has worked so tirelessly to make our very complicated show work inside this beautiful and unique theatre ! 🇫🇷.....,.....♥️...............🙏🏼 #madamextheatre #legrandrexparis #godcontrol

Such a pleasure to see Jean-Paul, a dear friend and great talent! 💙 @jpgaultierofficial #madamextheatre #legrandrexparis

Yesterday Madonna kicked off her first Madame ❌ show in Paris. The venue sent out a message that due to technical difficulties the doors would open only at 9pm. The show itself started at midnight 😱 and lasted until 2.15. The beer bitch was Jean-Paul Gaultier. The polaroid sold for €2.000. . . . #madonna #madeyes #madamex #madonnaparis #legrandrex #madonnatour #godcontrol #anewdemocracy

plays a Game Of Thrones with one of her favorite Knights! @gwendolineuniverse ⚔️🗡🖤 #madamextheatre #thelondonpalladium

The Madame X shows in Paris on Feb. 20th and 25th have been cancelled, due to Madonna’s injuries. Let’s hope the cancellations will now stop 😕 . . #madonna #madeyes #madamex #kneeinjury #showcancelled #parisshows #legrandrex #madonnatour

Madonna sings The Sound of Silence

London Palladium closes curtain before the end of the show

Last night, Madonna performed the full show, starting with God Control. But the theatre closed the curtain before she could start I Rise. Madonna cursed that she still had a song, came out anyway, with the dancers who weren’t dressed correctly yet. She didn’t have the beer chat but instead performed part of Don’t Cry For Me Argentina, because Andrew Lloyd Webber was in the audience. The polaroid sold for £2,000. . . #madonna #madeyes #madamex #dontcryformeargentina #andrewlloydwebber #polaroid #irise #godcontrol #curtaincall #curfew #madonnashow #londonpalladium

M: "My Super Bowl performance was the best"

Tonight, Madonna again performed a shortened show, starting with Vogue. This might be the fate for shows thar second in a row. The polaroid sold for £1700. Madonna talked about the Super Bowl, claiming her performance as the best one. She now has 2 days of rest before resuming on Wednesday. Thanks to Daniel for the details on tonight’s show. . . #madonna #madeyes #madamex #madonnalondon #londonpalladium #polaroid #review #vogue #cutshort

Good news guys! At yesterday’s concert, Madonna performed the entire show (except for Crave and Papa Don’t Preach which both seem to be out for good). She went on around 8.55. The polaroid sold for £1500. She danced on flats and performed Come Alive barefoot again, but seemed in good condition and good mood! ☺️❤️ . . #madonna #madeyes #madamex #madonnalondon #londonpalladium #madamextour #kneeinjury #barefoot #comealive #crave #papadontpreach #madonnalive #madonnatour #polaroid

London shows on Feb. 4 and 11 cancelled

The London shows on Feb. 4th and 11th are cancelled to give Madonna enough rest to perform the other shows. We feel with the fans who had tickets for those nights, but at least we know a bit in advance this time... 😕 . . #madonna #madeyes #madamex #showcancelled #kneeinjury #madonnatour #londonpalladium #tourissues #madonnacancelled

Madonna started at 9.30pm tonight, an hour late. Because of the curfew, she cut out the entire first segment and instead started with Vogue. Crave was also out again. 🇬🇧 . . #madonna #madeyes #madamex #londonpalladium #theatretour #crave #vogue #europeantour #kneeinjury

Come Alive on her bare feet

After Sunday’s cancellation, @madonna was back on stage last night. The show started a bit before 23h and lasted until 1.30. She didn’t perform Crave, and Papa Don’t Preach was still out as well. Come Alive was performed on bare feet. The polaroid was bought by fan Israel for €5.000, and he offered another €5.000 for a selfie with her. Madonna seemed in a good mood, took a lot of breaks to talk to the crowd. Fingers crossed that the following shows will be on track too! 🤞 Thx to @dorrithderoode and Daniel for the feedback. . . #madonna #madeyes #madamex #madamextour #lisbon #tourreport #showdetails #crave #papadontpreach #comealive #polaroid #selfie

First Lisbon shows are being filmed for future release!