After touring arenas and stadiums for much of the last four decades, Madonna is experimenting with a new format for her live shows, playing mini-residencies in theaters around the world.

The Madame X Tour kicked off with a sold-out 16-show run at Brooklyn's Howard Gilman Opera House (the theater is one of many facilities at BAM, the Brooklyn Academy of Music). Averaging less than 2,000 seats per night, Madonna played to intimate audiences over the span of a month. According to figures reported to Billboard Boxscore, the shows combined to gross $9.6 million and sold 31,401 tickets. 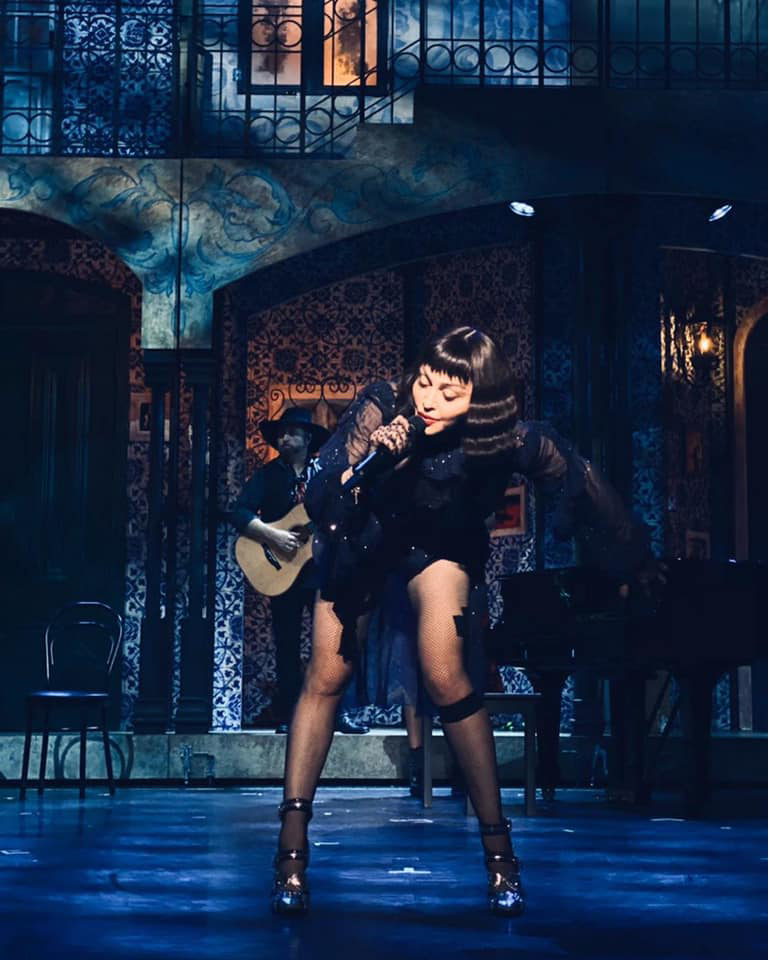 Playing such intimate shows means that the extended stay at each venue is necessary in order to capture the wide-ranging audience that Madonna has previously been able to reach in just one or two shows per city. Her last venture in New York was a two-show stint at Madison Square Garden, where she grossed $5.2 million and sold 28,371 tickets on the 2015-16 Rebel Heart Tour. Further, she hit Yankee Stadium on Sept. 6 and 8, 2012, pulling in $12.6 million from 79,775 tickets -- more than twice the attendance of her 2019 theater run, playing one-eighth of the shows.

Though reports through Madonna's 1993 The Girlie Show World Tour remain incomplete, the Queen of Pop has racked up an incredible $1.3 billion gross from 11.5 million tickets over 516 reported shows, making her the second highest-grossing soloist in the history of Billboard Boxscore (she is the highest-grossing female artist, while Bruce Springsteen is No. 1 overall).

The Madame X Tour continues with seven dates in Chicago through Oct. 28, followed by multi-show runs in six additional U.S. cities and three European legs. With about 75 shows to go, smart math projects the tour to wrap in the $50 million-$55 million range. But as many of the upcoming venues are larger than the theater at BAM (Chicago Theatre holds 3,500 and The Colosseum at Caesars Palace tops 4,000 seats), the final gross could stretch past $60 million before its March 8, 2020, close at Paris' Le Grand Rex.

The "Lover" mastermind showed some love to the pop icon with a post full of praise that she shared as an Instagram story on Sunday.

"Thank you @Madonna for an outstanding show," Swift wrote alongside what appears to be a backstage photo with friends, including Queer Eye's Antoni Porowski. "Shout out to the phenomenal dancers, singers, musicians, set designers, crew, wardrobe, glam, and M who gave it everything."

Fans of both artists might remember they took the stage together in 2015 at the iHeartRadio Music Awards, where Swift accompanied Madonna on guitar for "Ghosttown."

Saturday's show in Brooklyn was the last of a string of dates Madonna had scheduled at the BAM Howard Gilman Opera House. She's taking the Madame X Tour to Chicago later this week.

Check out a screenshot of Swift's Instagram story -- which Madonna also reposted on her own page -- below.

If you are to attend one of Madonna's upcoming Madame X Tour shows, please note that to ensure ease of entry, doors will open at 7:30PM, three hours prior to the show's 10:30PM start. However, due to anticipated admission processing time please arrive no later than 9:30PM.

The show will be approximately 2 hours and 20 minutes long. If using public transportation, please be sure to observe service end times when planning your travel.

Thank you and enjoy the show!
The Madame X team"

Madonna's team has announced that Monday's show won't be rescheduled:

"With the Madame X concerts departing from the Brooklyn Academy of Music this weekend, we regret to inform you that Madonna is unable to reschedule the concert previously scheduled for Monday, October 7th. We apologize for any inconvenience.

Refunds will be automatically issued to the credit card on which they were ordered."

Due to a knee injury, Madonna is forced to take some rest, causing her to postpone yesterday's shw (Oct. 7).

Its Hard for Madame ❌ to admit that she is also a human being made of flesh and blood and she must rest for the next 3 days to insure full recovery for her knee. I am not a quitter. This hurts me more than you can imagine. Its time to take those heels and fishnets off for a few days! 👠. Thank you for your understanding. ♥️. See you very soon !! #recovery #madamextheatre #nevergiveup #ongod

The official announcement mentions that the shows of Thursday (Oct. 10) and Saturday (Oct. 12) will go ahead as scheduled. Though there are rumours circulating that the stage elements are already being removed from the BAM theatre, feeding the idea that the rest of the NYC shows will be cancelled. But before we speculate further, let's wait more official news.

We wish Madonna a speedy recovery!

Madonna.com has announced the rescheduling of the opening shows in Chicago and San Francisco:

With highly specialized production elements, Madonna's Madame X Tour date originally slated for Tuesday, October 15th at the Chicago Theatre will now be rescheduled to Monday, October 28th becoming the last date in the 7-show run in this city. There is no change to the performances scheduled for October 16, 17, 21, 23, 24 and 27.

Tickets for the October 15th performance will be honored at the October 28th event. Refunds if required will available via the original ticket purchase link accessed either via desktop or mobile.

Also, the show originally slated for Thursday, October 31st at the Golden Gate Theatre in San Francisco will be rescheduled to Tuesday, November 5th. There is no change to the performances scheduled for November 2 and 4.

Patrons who purchased for the originally scheduled October 31st event will receive tickets with the new performance date of Tuesday, November 5th. Fans who are unable to attend the November 5th performance and prefer a refund, please email tickets@broadwaysf.com and include your order # or call BroadwaySF at 888 746 1799.  We apologize for any inconvenience.

Youtube account Eightminutesupsidedown has added a new video, explaining which samples have been used in some of Madonna's songs.

Sampling is a common practice in pop music, and not to be confused with covering or plagiarising. Most of the samples mentioned were used intentionally and are being credited on her albums.

While some are a bit farfetched, and others are obvious (such as Mirwais sampling one of his own songs), but overall, the video gives an interesting insight on which songs influenced Madonna and her producers.