Photographing Madonna: "That DVD cover was taken with my hand covered in blood"

With the highly anticipated release of the Rebel Heart Tour coming up next week, Mad-Eyes meets with Josh Brandão, photographer and Madonna fan, who snapped the gorgeous photo selected as the cover of the release. 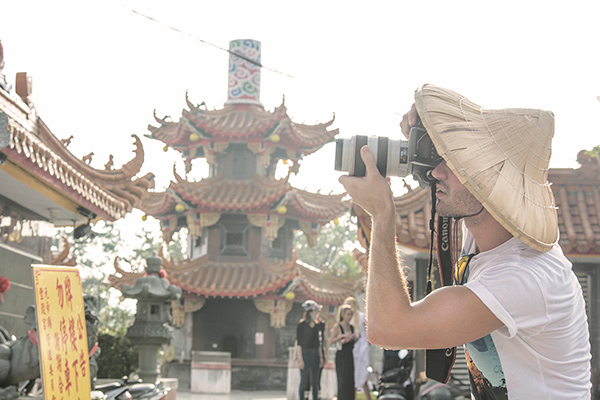 Josh while working on a photoshoot in Taiwan, 2016 (image by Nicolai Kornum).

Josh Brandão is a Brazilian-British Fashion Photographer and Film maker based in London. He travels all over the world creating magazine editorials, fashion campaigns and teaching photography. His work with fashion films has earned several awards in prestigious film festivals internationally and he had photographic work exhibited in New York and London. On top of being a very accomplished professional, he is also a massive Madonna fan and just had the honour to photograph the beautiful cover for the Rebel Heart Tour DVD, Blu-ray and CD.

Mad-Eyes webmaster Bart has been a long-time friend of Josh and sat down for a coffee with him to find out the story behind this amazing photo.

Mad-Eyes: First of all, congratulations for getting your gorgeous picture selected for this release. How do you feel?

Josh Brandão: Thank you so much! I have to admit this hasn't sunken in completely yet. This is such a dream come true to me that at the moment it feels a lot like a dream still.

M-E: The picture is from the Unapologetic Bitch performance. Where and when did you take it?

JB: It was taken in Prague on the first of the two shows of the Rebel Heart Tour on November 7th, 2015. I also photographed Madonna during the shows in Barcelona and Paris.

M-E: Can you tell us a bit how you got this picture to Madonna? I imagine it was quite a long process?

JB: This was a really long process indeed. About 8 years long to be more precise. I've been taking photos during her concerts since the Sticky and Sweet Tour but things started to get more serious during the MDNA Tour. Obtaining permission to photograph her is extremely difficult, especially when you're not a press member or you're outside of her pool of official photographers. By the time of the MDNA Tour I had already made some contacts within her team after photographing a few shows and one of them showed Madonna my photos. I then received a message from Madonna via her management, thanking me for the photos and saying she loved them. They wanted to use my images for the release of the MDNA Tour DVD but for some reason it just didn't happen. 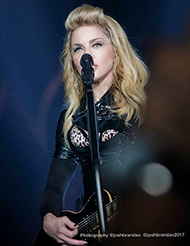 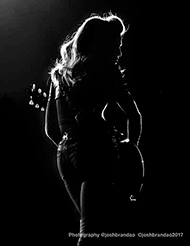 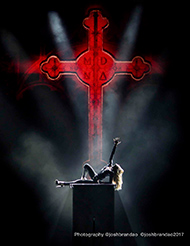 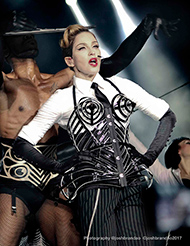 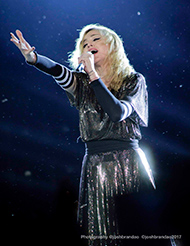 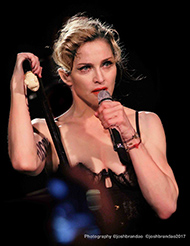 Photos by Josh Brandão, taken during the 2012 MDNA Tour.

When the Rebel Heart Tour started, I followed the same process but this time, after receiving my photos, Madonna started using some of them on her Instagram account while she was still on tour. She was really great about it and added my name and tag on the description of the photos when posting them.

All the photos were completely unpublished and unseen by the public until Madonna made use of them first. Some people think I was only a fan and that Madonna came across my photos on social media but the truth is that my images were taken exclusively for Madonna, they were all delivered to her first and that she decided what to post and use before me or anyone else. This took years of hard work and patience. 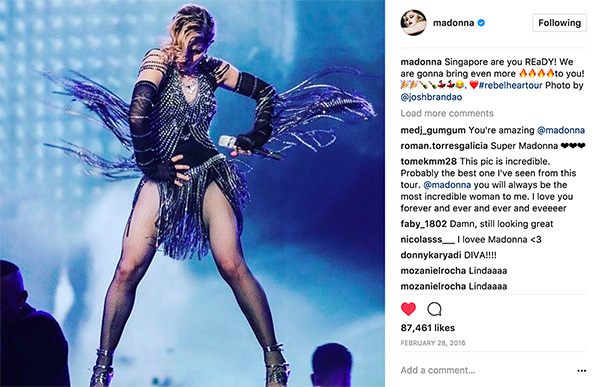 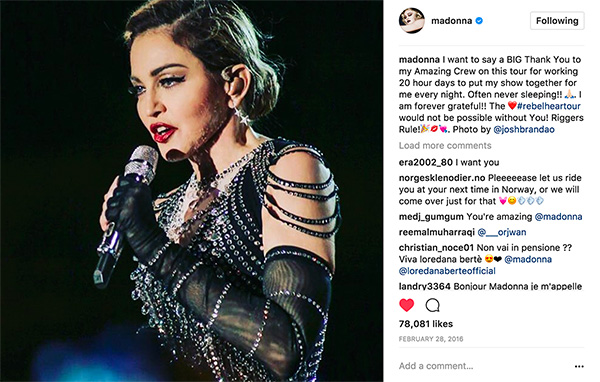 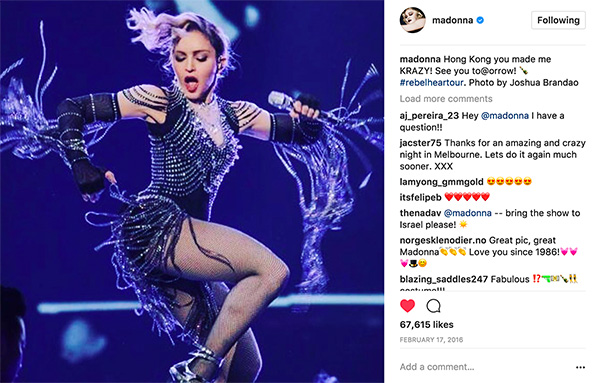 Madonna used several photos by Josh on her Instagram, including the final cover photo.

M-E: There was some confusion about which picture would get chosen for the actual cover. When did you know your photo was ultimately selected?

JB: Last year, they decided to use the Unapologetic Bitch photo to promote the show broadcast on Showtime. According to her team, Madonna really loved my photos and I imagined they would probably use some more to promote the release of the tour on DVD. But since she had already used that particular image a couple of times I thought they'd want something completely new for the cover and not necessarily mine.

In May this year, a supposed cover for the DVD started circulating on the internet although nothing ever came from any official Madonna platforms. Suddenly I was bombarded with messages from her fans asking me to let her use the UB photo for the cover because they loved it. There was even a campaign from Brazilian fansite MadonnaOnline making a petition for the photo to be the cover. I was very flattered but embarrassed too! (Laughs)

I contacted M's team and although at that point they did not confirm whether or not my images were going to be used on the DVD, they assured me that no matter what was being said on the internet, if it wasn't coming from them or Madonna herself, then it wasn't official.

On June 20, I found out the image was chosen for the cover just as everyone else when I received the newsletter from Madonna.com. I honestly could not believe it and thought it was still only promotion on her website. Later that day I was contacted by Madonna's team to congratulate me and confirm that it was indeed going to be the cover for the DVD, Blu-Ray and Live CD.

I know for a fact that the image was chosen by Madonna herself but it's really nice to know that the  fans also love it and seem to be quite unanimously happy with it.

M-E: You've send her more than just this picture. Was this your favourite too, or were there other contenders?

JB: In my opinion, there were 3 photos amongst all of my images that Madonna received that were "cover" material. All of them were from the Unapologetic Bitch performance in Prague but very different from each other. One had Madonna displaying her gorgeous smile, which to me translates how much fun she seemed to be having on this tour. The second had Madonna in a very sexy pose, with her hair covering half her face, almost combining the live show with a fashion photoshoot. Then the one chosen for the cover which has always been my absolute favourite, showing her with a very fierce facial expression, very much in the moment of the performance. To me, that shot represents perfectly Madonna's strength, beauty and vitality on stage. It's a strong testament to her power, her longevity and rebellious spirit. 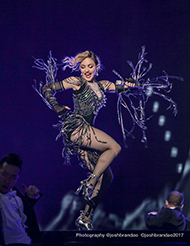 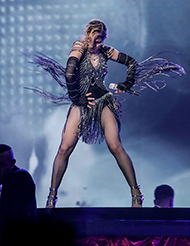 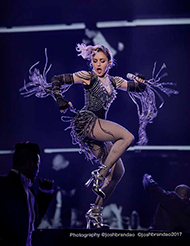 The final cover of the Rebel Heart Tour release (right) and two other contenders (left, center).

Besides that, it's curious how that moment was extremely difficult for me to photograph. I had already seen two shows of the Rebel Heart Tour prior to Prague, in order to study the best moments and angles to shoot. People who've seen the show know that particular moment in Unapologetic Bitch happens very fast and she moves very rapidly. On top of that, I had technical issues with my equipment earlier in the show and I cut my hand while fixing it. With all the adrenaline and stress of the situation, it wasn't until the end of the show when I realised that I had taken the photos with my hands covered in blood.

It wasn't even a big deal to me at the time but now I think this gives an extra personal symbolism to me and the cover photo.

M-E: It took you literally blood, sweat and tears then!

M-E: Will any of the other photos see the light of day?

JB: Some more images were included in official press kits and are already circulating on the internet.  And now that the official launch has happened and I don't see why the other images will remain unseen. I'm happy to share here two outtakes exclusively with Mad-Eyes. 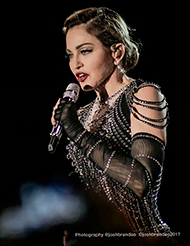 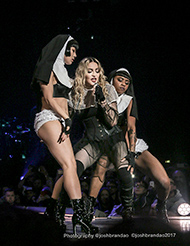 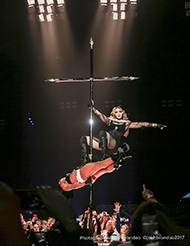 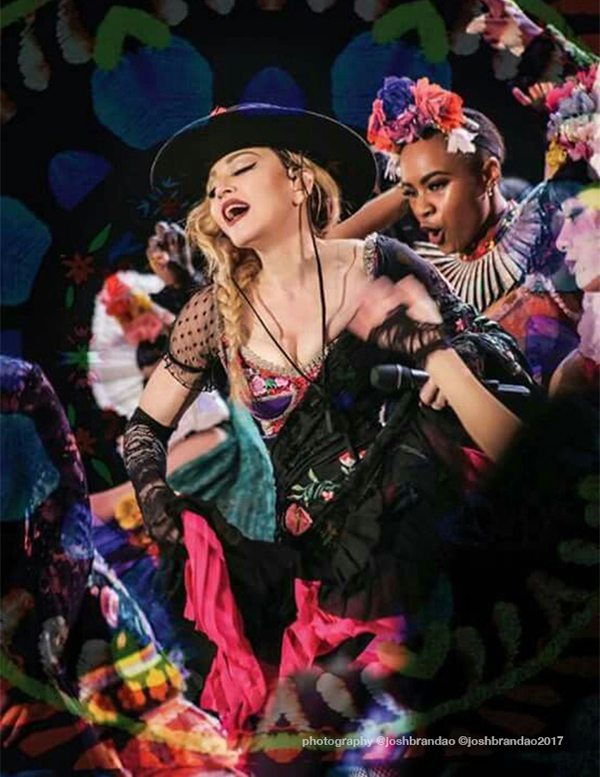 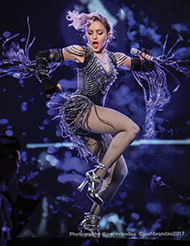 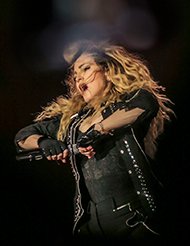 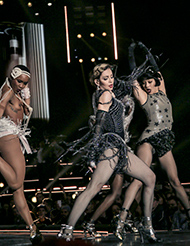 These photos by Josh were released as official press kit to promote the release of the Rebel Heart Tour release. 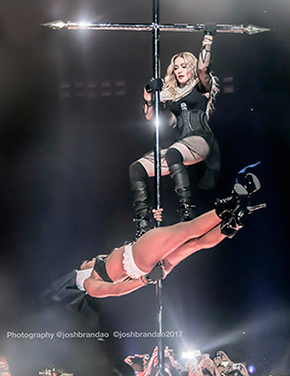 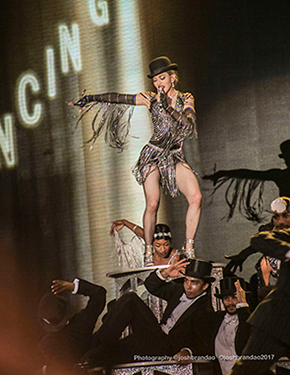 Outtakes from the Rebel Heart Tour, shared by Josh exclusively for Mad-Eyes.net.

M-E: Let's dream a bit: imagine she calls you tomorrow to do a photoshoot together. How would you like that to go? Already have some ideas for that?

JB: I've been a Madonna fan since I was 6 years old. To me she has always been much more than a pop star. She was a mentor, a friend, a huge source of inspiration and she still is. But I guess that's the case with most of her fans.

I remember first imagining myself photographing her when I was a teenager, watching her tours and videos on TV. I grew up and became an artist and a photographer. Years later, photographing Madonna, having my photos reach her hands first, having my photos used officially by her and chosen by her for the cover of her Tour Film and CD is definitely one my biggest accomplishments so far, personally and professionally. I believe this happened because I listened to all the lessons Madonna taught me growing up and I did not give up until I achieved it. No matter how many setbacks I had getting there. I always believed this would happen and I also had really good friends around me who believed in my dream and helped me achieve it.

And I still have many dreams and ideas that involve creating with Madonna but, as usual, I will have to share my ideas with her first (laughs).

I really believe anything I want can happen if I continue to work towards it and I won't give up no matter how long it takes. It's that kind of thing that you want so much that it can't not happen. Madonna taught us that. 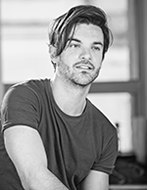