Madonna has linked up with Nigerian singer Fireboy DML for a music video shoot.

Taking to social media, a popular US tabloid, revealed that Madonna and Fireboy DML were seen together on set for a Frozen remix video shoot.

#HotShot #Madonna out here slaying the gurls. BTS of her and #FireboyDML on the set of their frozen remix video shoot!

In her Instagram stories, Madonna posted an updated version of her 2006 Sorry remix video, which served as an interlude on her 2006 Confessions Tour.

In the 2006 video - also known as Don't Talk, Don't Speak - Madonna made a political statement against the war efforts of the Bush administration, while also displaying dictators such as Saddam Hussein, Osama Bin Laden and Adolf Hitler. We're now 16 years later, and unfortunately only the names have changed. Vladimir Putin, for years the dictator and oligarch of Russia, has invaded the independent state of Ukraine. By placing his face in the video, with the word 'LIES' over it, Madonna clearly states her disapproval of his actions.

Whether it's Britney Spears on Me Against The Music or Ricky Martin on the criminally underrated Be Careful, if its one thing Madonna herself knows, it is the art of the perfect collaboration. With 2022 poised to celebrate the 40th Anniversary of her landmark single Everybody in the most dance-tastic way, Madonna seems ready to join forces with another pop superstar to mark the occasion; all arrows are pointing to a once in a lifetime studio collaboration between the Material Girl and pop superstar Katy Perry. 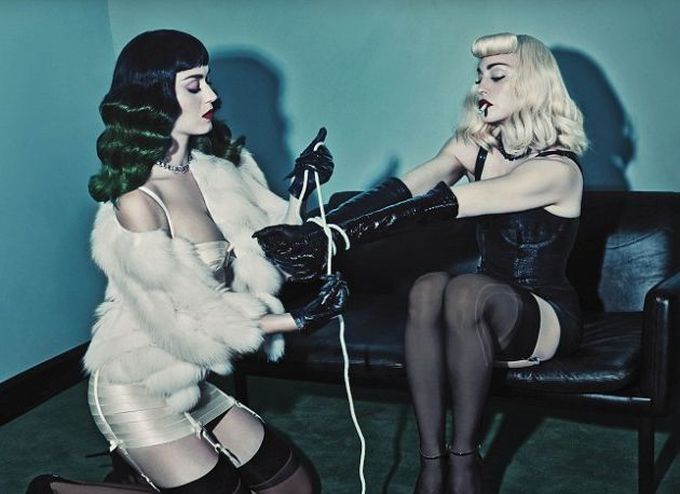 Information on the upcoming remix project is limited, but this is what we know so far; The project is going to celebrate Madonna’s massive accomplishment of landing fifty #1 songs on the Billboard Dance Club Song Chart. The package is due to drop ahead of the 40th anniversary of Madonna’s single Everybody this October. As for the remix package, little more is known about the content or the remixers on board. Madonna did drop one hint though, on an Uber-talented DJ who may be appearing on the package. Last month, Madonna took to Instagram and posted:

"In the Stu working on 50 dance remixes with @therealmikedean and a little help from @honeydijon" to which Dijon responded "What an honor!!!!! You da best"!

While friends for quite a number of years, this will be the first studio collaboration for Madonna and Perry. They've appeared in photo shoots together, most notably a Bettie Page-style, retro shoot for V Magazine in 2014, courtesy of legendary photographer Steven Klein.

In late 2015, Perry joined the Material Girl on stage during her Madame X tour for an ultra-cheeky banter-fest during Madonna's performance of Unapologetic Bitch. Perry cheekily expressed being "such a fan", taking a shot from Madonna's flask (disguised as a banana), after which Perry received a kiss on the hand & curtsey from Madonna herself.

As biopics go, this one is a biggie. After almost 40 years in the public eye, shape-shifting pop queen and destroyer of charts Madonna is finally set to have the early years of her stellar career dramatised for the big screen.

The project's been in the pipeline for a while – Madonna revealed that she was working on the screenplay with Juno scriptwriter Diablo Cody a couple of years ago – but auditions are now underway, with Madonna documenting the "surreal" process on Instagram. Fan theories suggest that Ozark and Inventing Anna's Julia Garner is in the running for the lead with Uncut Gems's Julia Fox allegedly in talks to play Debi Mazar, Madonna's longtime pal and Goodfellas and Entourage actor.

There's no doubt that this particular era of Madonna's life will be ripe for storytelling, encompassing the release of her first hit single, 1983's "Holiday", wild nights at iconic Manhattan club Danceteria and her romantic relationship with the artist Jean-Michel Basquiat. We're very much here for a dramatic retelling of the moment Basquiat made Madonna return all the paintings he gave to her after they broke up, before wiping them out with black paint. Artworks by Basquiat – who passed away in 1988 – now go for more than $100m a pop.

However, the fact that Madonna is so closely involved in the project gives us cause for concern. It's no doubt handy to have the subject of a project on hand for first-person insights, but to also let them have final sign-off could spell disaster. There's a reason why the Jeen-Yuhs directors didn't let Kanye West have final cut on the new three-part Netflix documentary about the rapper. "Open the edit room immediately so I can be in charge of my own image," demanded West via a now-deleted Instagram post. Director Clarence "Coodie" Simmons told Newsweek why he refused to do so. "I told him it had to be authentic," he explained, informing West; "If you have any control over this, it loses its authenticity.'"

Jeen-Yuhs might be a documentary, but the point still stands. When it comes to relaying an authoritative, engaging tale, being too close to the source can actually be a bad thing. With the subject of the film pulling all the strings, the opportunity to rewrite history is made far too easy. Why would someone cast themselves in a bad light if they're literally in charge of the whole lighting department?

It's a mistake that has been made time and time again. That Queen had control over the 2018 biopic Bohemian Rhapsody led to some serious airbrushing of Freddie Mercury and Elton John's executive producer role in 2019's corny Rocketman was supposedly hands-off, but his partner David Furnish ran the project day to day. Though a favourite with fans, Taylor Swift's 2020 Netflix documentary Miss Americana – with which the star was closely involved, helping to choose director Lana Wilson and providing self-shot footage from her phone – was written off by critics as a cynical exercise in brand Taylor Swift. Variety's Owen Gleiberman called the film "a controlled and sanded-off confection of pop-diva image management".

Similarly, Katy Perry's 2012 Part of Me tour doc was also considered to be a shameless puff piece. "All of Perry's on-screen interactions with intimates, especially a painfully stiff visit to her grandmother, feel as phoney and staged as the post-show meet-and-greets with her fans, and we're left with zero sense of what she's really like as a granddaughter, sister, boss, or friend," argued Slate's Dana Stevens.

Stars can also turn on projects if they don't like what they end up seeing. Last year's Jagged – a documentary about the creation of Alanis Morisette's 1995 breakthrough album Jagged Little Pill – looked at the Canadian artist's struggles from a contemporary #MeToo perspective, with the singer revealing how record executives asked her to lose weight as a teenager and discussing sexual advances from men far older than her. Though she'd agreed to take part in Jagged, Morisette later denounced the film, calling it "reductive". 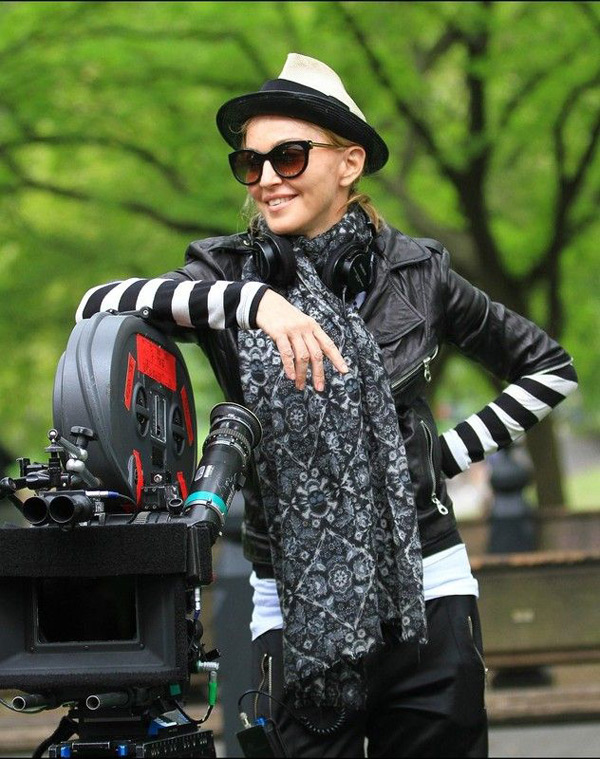 When it comes to Madonna's as-yet-unnamed biopic, the star is credited not just as co-screenwriter – Cody was replaced by Erin Cressida Wilson, screenwriter of 2002 erotic comedy Secretary, which fits well with Madonna's own fondness for all things explicit as evidenced by her 1992 coffee table box Sex – but also as producer and director. But this, unfortunately, brings to mind Madonna's previous stints behind the camera. First was her panned directorial debut, the 2008 comedy musical Filth & Wisdom, then there was 2011's WE, a historical drama about Wallis Simpson, which was released to decidedly mixed reviews. The Independent joined an unimpressed chorus to brand it "very cumbersome".

To hear that Madonna is returning to one of her least well-received creative endeavours doesn't fill me with much hope, but I'll reserve judgement until the film is released. Not least because until recently, biopics about female musicians were few and far between, with the notable exceptions of Coal Miner's Daughter (1980) – which told the atmospheric tale of country singer Loretta Lynn, winning Sissy Spacek an Oscar in the process – and J-Lo's turn as murdered Mexican-American pop sensation Selena in the film of the same name in 1997. But in recent years there's been a rush of decent female-fronted films that have cracked open the fascinating lives of everyone from Judy Garland and Aretha Franklin to blues singer Ma Rainey.

But none of those stars were able to fiddle and fuss over final cuts, largely due to the fact of corporeal impossibility. Forthcoming Whitney Houston and Dusty Springfield bios – with British actor Naomi Ackie and Quantum of Solace star Gemma Arterton playing the late legends – also won't feel compelled to avoid the more troubling or traumatic aspects of either star's life, while Baz Luhrmann's Elvis biopic should be able to show Presley's downs as well as his ups, its subject having passed away in 1977. With Madonna at the helm of her own movie, it's unlikely she'll show us anything that doesn't fit the brand she's spent decades building.

"Auditions for my film are a surreal experience," she writes. "But I'm enjoying dancing to the classics!"

Madonna's biopic is not only happening, it's now at the casting stage.

The Material Girl's self-directed film, or "visual autobiography," as she describes it, is still very much under lock and key.

Though Madonna has taken to social media to confirm that her project is moving forward.

In the new clip, the pop superstar can be seen getting into the groove, dancing in a studio to her 1983 classic Burning Up.

"Auditions for my film are a surreal experience," she writes. "But I'm enjoying dancing to the classics!"

It's not that others haven't tried telling the Madonna story for the big screen. They've tried, and failed. And, in her own words, she's taking the reins to get it right.

One studio sent her a draft script, which she described as "the most hideous superficial crap I ever read," she told Jimmy Kimmel during a late-night interview last October. And the studio tapped a "total misogynist" to direct, she continued.

"Why would these people make a movie about my life?," she continued. "There's nothing true in the script, the guy who is making it has no understanding of women, no appreciation of women, no respect for women." Later in October, she announced her own script was "almost finished."