Hi Gary,
Seeing how digital song sales now far outpace sales of physical singles, I'm curious about the to-date digital sales of the "divas" who enjoyed a large portion of their success in the '80s and '90s.

Thank you and keep up the great column.
Jim Radenhausen
Reeders, Pennsylvania

Hi Jim,
Here is a breakdown of the five singers' top-selling digital songs. Madonna (two) and Carey (four) are the only artists of the quintet with songs that have each shifted more than a million downloads:

The official launch of the complex, which has a surface of 2500 square meters and a capacity of maximum 2500 people, will be held on November 29th in the presence of Madonna. The event will be very private, including some special guests and even a few new members will be able to attend the opening. No information on the selection process yet, but keep in mind that the pre-sale already started mid July 2010.

Apparently it will cost around $700 for a membership, including first and last month, but nothing has been confirmed yet.

The official logo has been revealed. The website hardcandyfitness.com has been launched, currently only featuring a splashpage with a beautiful shot from Tom Munro's photoshoot for the Sticky & Sweet Tour book. Another spicy detail: the official tagline seems to be "Harder is better".

Madonna to open Hard Candy fitness centers around the world

Madonna in partnership with her manager Guy Oseary and New Evolution Ventures (NEV) announced the establishment of Hard Candy Fitness global gyms which will open in major cities around the world.

The first Hard Candy Fitness is a beautiful and uniquely designed 30,000 square foot space which is scheduled to open in Mexico City mid November in the exclusive Bosques de las Lomas area. Madonna will be visiting the gym on the 29th of November for the official launch. 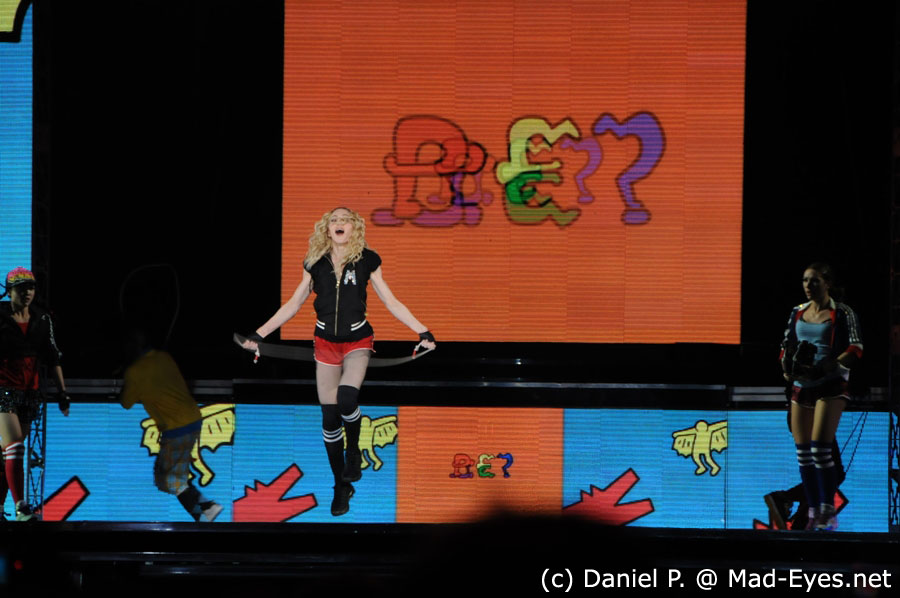 Throughout her career Madonna has been devoted to fitness and well being and has worked out in literally hundreds of gyms around the world. As a result, she has a strong vision on what the ideal exercise, dancing and work out environment should be.

The direction for how to bring that vision to the fitness world began to take shape during an initial meeting between Mark Mastrov, the innovator behind 24 Hour Fitness and Guy Oseary early in 2008. Mastrov has built a fitness empire of over 420 clubs in 16 countries. Mastrov, his partner Jim Rowley of NEV, Craig Pepin-Donat, the Vice President of Marketing and Development, along with Madonna and Oseary, are now in the planning stages of opening 10 more locations in Russia, Brazil, Argentina and throughout Europe and Asia.

In addition, they are currently exploring opportunities and local partnerships around the globe for facilities where fitness, fashion and entertainment create a unique member experience."Madonna's world tours have taken us to many of our favorite cities around the world. We are looking forward to opening Hard Candy Fitness with NEV in many of these same places," commented Oseary.

"Our goal is to create an environment inspired by Madonna's vision and high standards of what the ideal gym would be. Hard Candy Fitness will be a reflection of Madonna's point of view and will reflect her input on every detail including music space, light and other design cues. Madonna's touch will be everywhere." stated NEV Chairman Mark Mastrov.

Chris Dedicik, Hard Candy's Managing Director commented, "Hard Candy Fitness is a one of a kind experience merging fitness with entertainment. We are dedicated to exceeding the expectations of our members." Hard Candy Fitness members will experience the very best in innovative training methods including private, group and dynamic training including traditional classes such as Zumba, Latin Moves and Cardio Kickboxing as well as new programming designed specifically for Hard Candy Fitness.

The fitness center will also include a Bike Studio, a Mind Body Studio featuring The Great Wall, where members can practice BarWorks, Sculpting, Capoeria and the newest trends in Yoga. It will also house a healthy alternative Juice Bar/Cafe. The lavish locker rooms built with the finest materials will be a sanctuary for members who will be able to relax in sauna and steam rooms.

About New Evolution (NEV) - Based in Northern California, New Evolution Ventures (NEV) has a two-decade plus record of success delivering superior returns on investment in the acquisition, development, management and operation within the fitness industry, both domestically and internationally. Founded in 2008 by Mark Mastrov and Jim Rowley, the current team of NEV professionals represent over a century of experience working in a broad sector of health, wellness, sports, entertainment and fitness and have operations and investments in over 20 countries around the world.

Blond Ambition and Girlie bras in top 10 most expensive bras

Earlier this week, Adriana Lima unveiled the latest iteration of Victoria's Secret's Fantasy Bra collection. The Miraculous Bra, featuring 3,000 white diamonds, 82 carats of sapphire and topaz stones, is valued a staggering $2 million. The Daily Beast has summed up the 10 most expensive bras in fashion history. 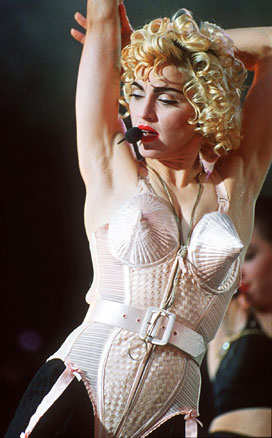 5. Madonna's cone bra from the Blond Ambition tour may be her most famous undergarment - but it turns out it's not the most expensive. The beaded bra designed by Dolce & Gabbana that Madge wore during her 1993 Girlie Show fetched $23,850 at a Sotheby's auction in 2001 - beating out the record previously held by its cone counterpart. Value: $23,850

6. The cone bra Jean-Paul Gaultier designed for Madonna's 1990 Blond Ambition tour defined an era. In 2001, the bra was valued at $4,500—but fetched $21,150 at a Christie's auction. Later, it was sold for an undisclosed amount to the Museum of Fashion and Textiles in Santiago, Chile. But the great cones of the Gaultier bra made a comeback this fall on Gaultier's runway and on several stars, including Lady Gaga and Katy Perry. The designer is also currently collaborating with lingerie brand La Perla on a new line of cone-inspired wonders. Value: Over $21,150

1. Leave it to the most valuable model in the world to wear one of the most expensive bras. In 2005, Victoria's Secret's Gisele Bundchen modeled the Red Hot Fantasy Bra, which consisted of 1,300 precious stones—including 300 carats of Thai rubies stitched onto red satin. Value: $12.5 million

Kaley Couco, who currently stars in CBS' hit comedy The Big Bang Theory as Penny, recreated the almost 20 years old video of Justify My Love in the form of a photoshoot with the help of longtime Madonna collaborator Patrick Demarchelier.

Check out the rest of the photoshoot at CBS.com and catch Kaley on The Big Bang Theory every Thursday at 8 pm!

Stalker must stay away from Madonna

A Madonna fan who was arrested for scrawling messages outside the star's New York home has been ordered to stay 10 blocks away from the location.

The 59-year-old denied resisting arrest and weapons possession, and he will not be tried for creating graffiti.

His lawyer contested that his messages were not threatening and demonstrated he was a fan of the singer.

One of Mr Linhart's messages read: "M, the universe brought us together in 1992 and again this year in Prague. Meet me please."

An ice pick was also found in his car for which he was charged with criminal possession.

At the time of his arrest last month, Mr Linhart's lawyer Cheryl Bader defended his actions, saying: "There was no threatening conduct. My understanding is it's not a crime to adore Madonna. If it were, the court would be a lot more crowded."

The New York fire department said Mr Linhart retired from his job in 1998.

Pop queen Madonna has been courting the Royal Family over her new movie about King Edward VIII's romance with US divorcée Wallis Simpson.

Princess Michael of Kent has given tips to director Madge, 52, who wants her film W.E to be hot on accurate detail.

The Material Girl has also had audiences with Buckingham Palace staff and top historians in her quest to piece together the story of the affair which led to the abdication crisis of 1936.

The romantic drama - starring James d'Arcy and Made In Dagenham actress Andrea Riseborough - is Madonna's second attempt at directing.

She is desperate to make it a success after her first movie Filth And Wisdom was panned by critics two years ago.

A source said: "The entire Royal Family were contacted and asked if they would like to meet Madonna and production staff - and many took up the opportunity.

"Some senior figures turned it down. But others, including Princess Michael of Kent, jumped at the chance."

W.E focuses on how Edward gave up the throne to marry Mrs Simpson - who was still wed to her second husband when they met - plus a modern-day romance between a married woman and a Russian security guard.

The source added: "When the Palace were contacted by the film company for guidance on historical fact, they were a bit apprehensive at first given the subject.

"But when they heard Madonna was behind it they lent their support and arranged for key people to get involved."

The film - which has been shot in London and France - is due for release next year.

Sex, a 1992 picture book by Madonna, led the 2010 edition of BookFinders' 100 Most Sought After Out-of-Print Books List.

The annual list should give publishers plenty of ideas, especially since digital books can quickly resurrect backlist titles. The top ten most sought after out-of-print books are listed below. This GalleyCat editor remembers reading a battered paperback copy of Rage in middle school.

Here's more about Madonna's book from the post: "This explicit collection features photos of the Material Girl, without the material, has been a collector's item since it first hit shelves in 1992. Since Madonna is never one to do something twice, and the fact that the once highly controversial book is less edgy than it once was leads us to guess that Sex will remain out-of-print."